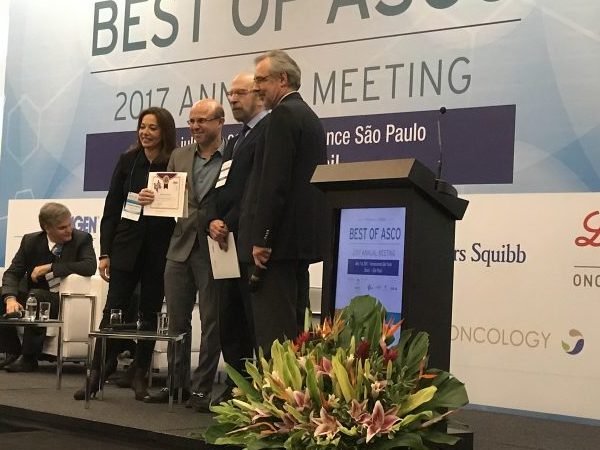 In July 2017 the event BEST OF ASCO Brazil took place at the Renaissance Hotel, in São Paulo. The event discussed the most important themes addressed during the 2017 yearly meeting of the American Society of Clinical Oncology, which was held in Chicago.

Organized by the LACOG – Latin American Cooperative Oncology Group, the BEST OF ASCO Brazil includes a parallel agenda for debates on the future of oncologic treatment in Brazil, as well as a ceremony to deliver diplomas to the initial CURA Ambassadors who are Dr. Fernando Maluf and Dr. Sérgio Simon.

Fernanda Schwyter, Coordinator at the CURE Project, delivered the diplomas and commented about the importance of uniting forces towards an integrated work to raise awareness and funds for the network that supports the CURE Project, thus providing financial feasibility for the research projects developed by LACOG.

The consolidation of research activities is one of the solutions to meet the needs of the population, particularly the individuals who rely on the public health system, by reducing the discrepancies and facilitating the access to the best treatments, therefore contributing to combat the disease

About the CURE Ambassadors

Dr. Fernando Maluf holds a Doctorate Degree in Urology by FMUSP – Medical School at the University of São Paulo and is a Clinical Oncologist. He is a member of the Executive Committee at LACOG – CURA, Head of Clinical Oncology at the Antônio Ermírio de Moraes Oncologic Center at the  Beneficência Portuguesa in São Paulo.